Meanwhile a huge missing and confusing piece remains, "Where will the newly expanded AUD patrons park? And now we see plans for the Nexus Center and U District! Plus the following concept suggests the AUD requires 3,000 spaces: Utica AUD & Apartment Concept. Utica's sports facility is growing, but where are the patrons going to park? Lots of plans for more events, more vistors, more jobs and downtown "economic development inducements", but where is everyone going to park?

We did see a parking plan as part of a proposed Apartment Complex On Whitesboro Street. We heard it came from Utica City Hall, a sports and apartment complex, but would it fit with everything else we here about? 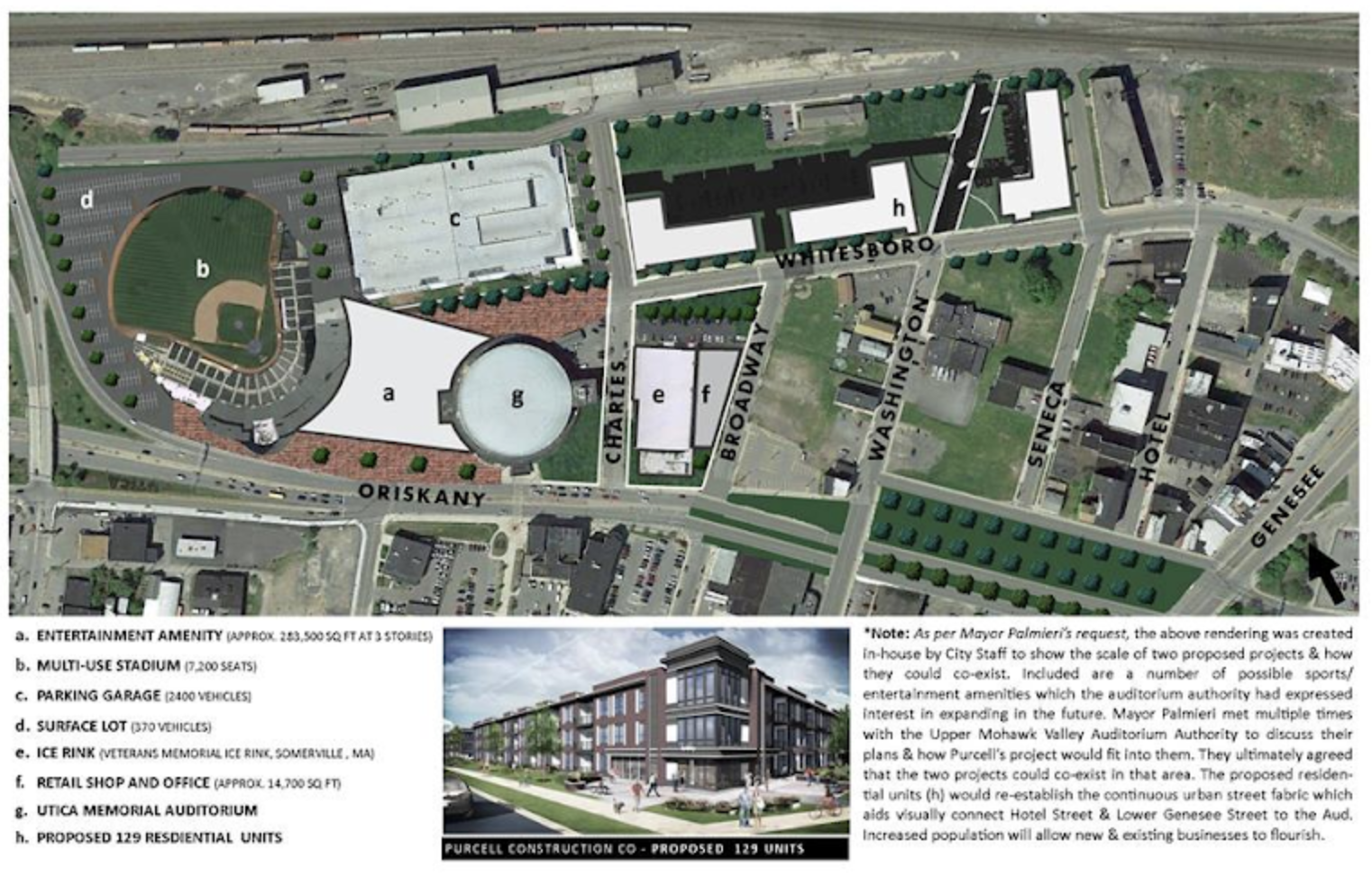 Consider - An illustrated Site Plan showing all the Parking Spaces Around MVHS Downtown.

June 14, 2021 - Eminent domain by Oneida County is unecessary. The hospital/public parking garage can be accomodated witout it and with Much Better Results, for Example.

The design will cover all the particulars of the garage, including such things as levels, outline and number of parking spots. https://t.co/xM4JYv8FP8

Will #mvhsdowntown ever be completed? Where will funding come from? Does #hospital truly require 3,000+ parking spaces? Will @MVHealthSystem go bankrupt? Where's helipad? One thing is absolutely true, eminent domain not required to for parking garage... https://t.co/OpjHoU5VG1 pic.twitter.com/rmPHMJ453i

September 21, 2019 - Parking facilities constructed under this Project will consist of a three-story, municipally-owned parking garage (1,550± spaces) and multiple surface parking lots (780± spaces), for a total of approximately 2,330 spaces.

Dedicated spaces are summarized below:

These parking facilities will be available for use by patients, visitors, staff, and volunteers, with the garage spaces being available for hospital-related parking, as well as to the community for non-hospital related events. (See page 10 of 1007 Ref. FEIS).

These spaces suggest the Helipad would double as a parking lot, not a grasses lot.

May 17, 2019 - Today we see the Varick Street Brewery District having parking issues related to new development and a staple event; read Where to park for Saranac Thursdays with Court Street lot closed. We discuss this Parking Issue On #NoHospitalDowntown.

December 30, 2018 - OUR VIEW: Downtown parking must be addressed

May 9, 2018 - The projections of required hospital parking spaces are totally and absolutely suspect, like most figures that MVEDGE has provided...

Anyone know why the proposed #mvhsdowntown hospital needs 3,000 parking spaces for @MVHealthSystem?

A case study of 11 successful Mid-Sized Urban Medical Centers shows Seattle Children's Hospital had the highest amount of parking spots with 3,100 - the runner up was at 1,500. pic.twitter.com/YtQUlvWogu

Do you realize how much could be saved—businesses, buildings, tax dollars—if the proposed hospital wasn’t such a parking hog? #utica #mvhsdowntown https://t.co/rkv9n5fHb3

The footprint of Utica's downtown hospital project is mostly taken up by sprawling surface parking. The sheer amount of asphalt dwarfs the hospital itself. This render highlights both existing and planned lots. Still up in the air- the fate of the UPD HQ. pic.twitter.com/KLRlpUS30W

November 14, 2017 - Even people in Syracuse have heard about this nightmare (parking) concept proposed in Downtown Utica...

Downtown Utica too small & hospital not a proper use. The 64-acres at St. Luke's is @MVHealthSystem board approved! https://t.co/UBpGFnIeX0 pic.twitter.com/xrckZHouga

The state of New York is giving hundreds of millions to a hospital to destroy downtown Utica. #nohospitaldowntown https://t.co/6g7XXgg8Dz

OUR VIEW: Agreement on parking garage a positive step for hospital project https://t.co/QS8wj9T5BE

And this from July...

July 3, 2017 - Expensive to build parking garages, one to be placed onto the backs of Oneida County taxpayers...

How much does health care cost you? If in @CityofUtica & Oneida County, $41 million more! https://t.co/Tltq3IhQzQ pic.twitter.com/3IqbHrsuI5

They also would include large surface lot(s) as well, and we have good reasons to believe there's a second parking garage hiding within the "hidden agenda" of their ill-conceived hospital concept!

Downtown Utica can't afford to fix current garages https://t.co/1J3u6WK3SL but adds new one! Plus a sea of cars too https://t.co/6jhEp6PisY pic.twitter.com/kXITcqoHQV

"... in September 2015 that it had chosen a site located between Oriskany, Columbia and State streets and Broadway in downtown Utica for the hospital, assuming that site proved feasible. and at least one medical office building also would be constructed in the neighborhood."

August 18, 2016 - "Parking: The project will include one or two parking garages; officials are leaning toward two so that one can be reserved for staff and visitors, while the other could be opened to the public after business hours."

We believe Utica's downtown hospital concept is a disaster!

May 21, 2011 - Looking back, we have real concern for downtown development, the most recent ($325,000) Master Plan, and parking. Consider this downtown story, A Paucity of Planning for Public Parking.

May 15, 2011 - And Paula Horrigan, a Cornell University professor and one of the overseers of the Rust to Green Utica project, said in Critics assail downtown Utica parking plan...

"...more surface parking is the opposite direction in which cities are going. She pointed out the Utica Master Plan still is in draft form, and called it a I would like to know what the city is doing to encourage creative investors who want to take a risk on a city where there is not a lot of vitality,” she said. “I cannot believe parking is the main issue.”

March 07, 2011 - At his “State of the City” address in May, Mayor David Roefaro called plans for a downtown parking garage his “most ambitious project for the city”, read additional commentary at Pondering Parking ... and Park Ave.

The City of Utica offers links to their Downtown Parking options totally 1,794 vehicles (when and if fully operational, .

Parking lots of cars - cars that are projected to fade from urban neighborhoods - plus many other reasons we list at, What's Wrong With The Downtown Hospital Concept?