40+ Businesses Utica Is Pushing-out Of Downtown For A 5th Hospital District!

Businesses in the targeted "bulldozer zone" included the following 40+ firms! Plus, according to a news story Will New Hospital Force Utica Police To Move? Since the whole downtown hospital story is on a "slow roll", we're surly learn they believe it makes sense to bulldoze the City Courts too!

"My business and buildings aren't going anywhere! My son Josh is currently working to open his pizza shop out front. My plans are developing as well; adding onto my office equipment sales & service, and expanding into history-based tours and canal-era tourism. , Joe Cerini, 424 Lafayette St, Utica - June 25, 2016

Here's the list! So many more than described in this 2016 new article, "Building A New Hospital In Downtown Utica Would Likely Require Several Existing Businesses To Move" The media used the words, "", and "" for over a year. In doing so they failed in their job to investigate...

2. Compassion Coalition Inc Continually expanded and has well over $200,000 of improvements.

3. YBG Or Your Bargain GrocerStory is moving buy space is needed by sister company above, The Compassion Coalition.

13. Labor Ready
Labor Ready was renting from Angela Elefante who owns the land and building, which was the former Greyhound Bus terminal. A new business, Enterprise Car rental, has just (April 2018) invested $300,000 and will open soon.

21. Iglesia Del Dios Altisimo (Church of the Most High God)

36. The Columbia Bar is closed, (hey, consider opening it up, and help the Brewery District grow further!), however the upper floors have apartments that look occupied.

37. The Utica Police Department Newly expanded police campus, millions spent as part of the Gateway Project, but the hospital might take it all and bulldoze it...

40. Empire Bath & Kitchen Inc Not within current footprint, but then again reports or disclosure as to exact footprint have never been fully documented amid changing headlines and stories.

41. Italian restaurant has plans to open at 424 Lafayette Street, however the dark hospital clouds have slowed their buildout.

42. A State Street "Repro Car Sales" business is operating out of a city-owned building, at the corner of Oriskany Boulevard; formally the city's sign shop.

43. Numerous city-owned building and parcels, see details of each property tax number at List of City Owned Parcels. These representing Police and Courts facilities and parking, as well as other buildings, More Details, See A Map .

More on these businesses and other buildings to follow. Including news, views, and stories of people who live in this area. People, families, who are working to restore historic homes and properties. In the meantime, please connect with #NoHosapitalDowntown on Facebook.

February 5, 2016 - Adding to development now- new businesses are not waiting for - nor require - a new downtown hospital! This, as a new Dapper Dan dry cleaner location is to open in downtown Utica. Their new location is just 1/4 mile from where misguided leaders wish to bulldoze 34-acres #NHD applauds Dapper Dan for not only investing in downtown, but doing so in an old brick building! 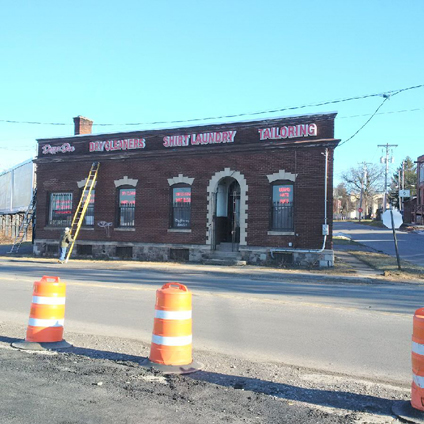 We encourage others to head down to the Columbia and Lafayette Street district; make a purchase or perhaps look to develop a business and or building.