June 2021 - They’re building a Downtown Utica Hospital, but there remains a Neighborhood To Save!

#NoHospitalDowntown vows to fight for years and with a great deal of time and money. This to save Downtown Utica from an unnecessary and unwise decision. Follow our research and observations regarding the Downtown Hospital Concepts, as we work to protect the Columbia Lafayette Neighborhood and over 40 Businesses & Property Owners.

First, here's What's Wrong With The Downtown Hospital Concept as we see it. Join the conversation on Facebook at #NoHospitalDowntown and learn about our fellow community stewards at BetterUticaDowntown.

It was a beautiful night in #DowntownUtica last night. Let's see what today holds! pic.twitter.com/JF7s37R60P

The above photograph is shot looking down historical Lafayette Street, into the Columbia-Lafayette Neighborhood.

January 26, 2018 - We have asked the New York State Dormitory Authority (@DASNY) if they would bulldoze a large part of Downtown Utica...

Do you also have intentions to bulldoze this section of downtown @CityofUtica for an ill-conceived @MVHealthSystem hospital? Asking for our concerned members here: https://t.co/sWIq99N5Oj pic.twitter.com/LxmJ6KfNd7

We'll await their answer, however we know the Required SEQR Study asks very early on, "What are the alternative locations?" One easy answer is the unanimously, hospital board-approved, 64-acre St. Luke's Campus - just 1.7 miles away!

January 9, 2018 - Yesterday anyone with decent vision could see a great deal of activity in the historic Columbia Lafayette Neighborhood...

This part of Downtown Utica is home to 40+ businesses, and has seen many millions of dollars of investment by many small business, as well as major police and city courthouse expansions. With the new AUD, Hotel Utica, the Landmarc building, improvements by NYS DOT on the Arterial, a new dry cleaners and Stewart Shops, it's Utica's hottest real estate - no hospital required!

August 25, 2017 - Just as Downtown Utica was Making an Impact, one that was drawing people to visit and live....

The proposal creates a great deal of "economic activity", but it would: waste healthcare dollars, it has already halted developments, and the outcome would be a poor, inner-city, hospital district that no one but a short term hospital employee might settle for.

August 18, 2017 - The hospital would be a HUGE buzz-kill for Downtown Utica, one that is senseless and would construct a HUGE undesirable element to walk around...

May 7, 2017 - Another mayor had hoped to bulldoze another block in downtown (he took down one building), but others were saved and the block made a comeback...

May 2, 2017 - A story in the Utica Observer-Dispatch proves we are on the right track, downtown needs to be saved from hospital bulldozers...

February 17, 2017 - Hospital Would Split Utica Neighborhoods, Drive-out 40+ Businesses The Columbia-Lafayette Neighborhood is an Very Active Business District, which connects many other Utica neighborhoods. A Large Inner-city Hospital District Would Disconnect It All...

Thank you @MadeInUtica for https://t.co/eypzhhWOQY Placing an inner-city hospital district into Downtown Utica would be backwards! #ThankYou

Our group will fight this ill-conceived concept every step of the way. Why? Because it's the wrong way to develop a small urban city, plus as Common Council President said, We Have A Lot To Lose. We'll do it with research, by tracking the headlines and informing the public on what appears to be a politically motivated decision that is also jeopardizing the current and future healthcare of the entire Mohawk Valley Region.

Please join #NoHospitalDowntown as we Battle For Our City!

December 21, 2016 - State & Utica To Stay Course, Seek ASM AG Replacement Chip Company If the Utica-area is to believe it should remain hopeful for a new chip company and or companies, then Downtown Utica should prepare for another wave of growth. Downtown we need every historic building, street and neighborhood for the next wave of people seeking a building to redevelop. Inner-city hospitals are not attractions, cool scenes and many mixed uses are way to go...

Stay tuned, we'll link to the many cool buildings that have been saved in recent years below. In the meantime please join us and stop Fiasco General!

December 13, 2016 - Promoters Of Downtown Utica Hospital Told Us To Go See Syracuse Hospitals Okay, but after walking around all sides of St. Joseph's we concluded hospital neighborhoods, especially inner-city ones, are not very desirable places to live.

Right next door and all around the St. Joseph Campus is blight, boarded-up homes and store fronts. Worse there were five historic homes, only one yet to be purchased by hospital, so they can build a parking lot!

Downtown Utica must avoid this fate at all costs!

October 15, 2016 - Utica Would Tear Down, Hoping For Better... But so many cities would love to have the assets we have. They would not Bulldoze 1/4 Of Their Downtown's Central Business District hoping their overall economy would improve. It's VERY backwards thinking, as they push-out 41 Existing Businesses and Bulldoze An Entire Nieghborhood to make way for a 34-acre, tax exempt, hospital district!

Yet that's what some [Here They Are] seem driven to do; bulldoze 34-acres and believe that their new "hospital district neighborhood" could connect Utica's other neighborhoods. Not a chance! They've used misguided surveys of larger cities and consultants seeking to flip real estate, as well as politicians desperate to bulldoze and building on the backs of the taxpayers instead of fixing the real ills of the region.

Via @Tanvim byway of @CityLab a story we REALLY like! https://t.co/XhAiSoRjbm BTW, when did a "hospital campus" become "a neighborhood"? pic.twitter.com/Nfabq7n7Gt

October 15, 2016 - Taxpayer-funded Utica Zoning Law, Historical Study Is Ignored In 2005 the City of Utica passed legislation to designate a large part of Downtown Utica as "Scenic & Historic" based on large number of Erie Canal-era buildings and history. Today the city's website ignore the law...

Many property owners and business developers have been working to advance a new Utica Brand, bringing old buildings back for a new downtown living and entertainment era. A large hospital district turns its back on all this, in addition to city law.

The design standards and came about during the Utica Gateway Plan were meant to protect the historical aspects that included the Columbia-Lafayette Neighborhood...

The Peter J. Smith & Company Inc Study of Utica prevents a large medical district, as its buildings are too big and would eliminate streets. Worse, the new police and court campus appears to be in the targeted to be bulldozed. The hospital concept doesn't fit and damages too much that should be safed- especially the 40+ businesses now functioning in downtown!

We are tracking the "yes people" who shout "Eds & Meds". It's an argument some are using to support a Downtown Utica hospital. However the research we've done regarding Eds & Meds does not help their case.

August 15, 2016 - Today's Newspaper Show Businessman Ignoring Hospital Concept, Organizing Joe Cerini of Citation Services, and his son Josh, Have no intentions of stepping aside for the Downtown Utica hospital. They're making their own plans. So, while many casual readers of the newspaper and watchers of TV news, may think the downtown hospital is coming - and cannot be stopped - well someone forgot to tell Mr. Cerini!

Story continues in today's @uticaOD regarding businesses in hospital zone. Not yet posted online, from page 4A: pic.twitter.com/MsDbNmsE25

Why does the City of Utica NY, not lookout for its businesses, and downright ignore some of them? Why does the newspaper give more ink to the politicians and hospital, and not more to those with a different idea?

Joe also just happens to be a founding member of #NoHospitalDownown

June 10, 2016 - Gone And To Be Forgotten? Utica, you have not been offered a single study of our medical facilities, healthcare infrastructure, nor our current or future needs. However, your government found $300M dollar and are planning an Urban Renewal-style bulldozer job to 34-acres of our small downtown's Central Business District (CBD), to make way for a New & 5th Hospital District!

Below is a picture of the Downtown Utica area as it would look After The Bulldozes Have Rolled for their ill-conceived hospital concept... oh boy, would this be a BIG (and truly sad and needless) transformation! Not a single study, report or open dialogue with taxpayers and residents.

So you want a #DowntownUtica @MVHealthSystem hospital? Ok bulldozers are done, go ahead build your medical district! pic.twitter.com/70aeuSxw8u

In doing so, they're already Pushing Aside 41 Business Entities. This is wrong, but not because Our Facebook Group does not want hospital investments, we do! However, it should not be done as the current process has been unfolding- with many more questions than answers- no studies, and no reports!

June 3, 2016 - Your Bargain Grocer Surprised It Could Be Consumed By New Hospital

This is a case of the government picking up and moving businesses, while taxpayers and healthcare consumers (and many in the medical community) have little say or idea of what's going on.

April 4, 2016 - The Columbia-Lafaytette Streets Nieghborhood This website and our group is here to protest and turn-away Our Local & State Goverment's Concept For A Downtown Hospital (a.k.a. Urban Renewal Circa. 2016)

If the St. Luke's Hospital campus was lifted up and placed onto downtown, look at the HUGE amount of Downtown Utica is would consume! Why on earth after the hospital worked for years to acquire 64 acres on a green hill, would they try and stuff the future of our regional healthcare into our small downtown?

Please Contact Your Government Representatives, Ask Them Why & To Stop This Ill-conceived Concept. 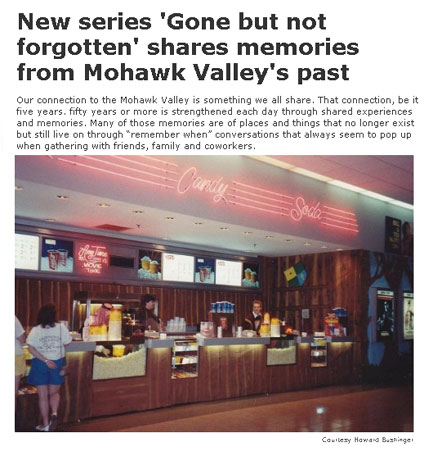 A city that honors its historic past, develops its assets, and protects elements making it authentic and unique, can be successful in attracting tourists, residents, and activities that all builds foot traffic. In recent years Downtown Utica has seen more people seeking to live downtown, this follows efforts by new businesses who have made downtown their home. Business owners purchased buildings at desirable prices, and a great deal of effort went into restoring them. Traffic is building, and Downtown Utica has become a cool place to travel too.

Yet just as these efforts are getting noticed, a large portion of Downtown Utica stands to be bulldozed to make way for a new regional hospital. Very little health-related studies, reports, or site location data has been offered. We've only a heavy-hand push by politicians, so we're seeking to stop a new downtown hospital and Preserve This Downtown Utica Neighborhood for more small-scale city developments.

Please Contact Your Government Representatives, Ask Them Why & To Stop This Ill-conceived Concept.

May 6, 2016 - A Sinking Feeling? Research offers an Empirical Study Of The relationship Between Real Estate Prices & Distance From The Nearest Hospital. It shows that hospitals are what the author calls "semi-obnoxious" amenities: you want to be near one, but not too near, because of hospital noise and traffic. As shown in #DowntownUtica Map, a hospital would impact prices within the blue area. Actually the circle should be larger, since the hospital could occupy a sizeable area, and the critical distance should be measured from the edge of the facility. Plus, nobody knows the size or shape they've imagined- let's hope that the Mohawk Valley Region never finds out! 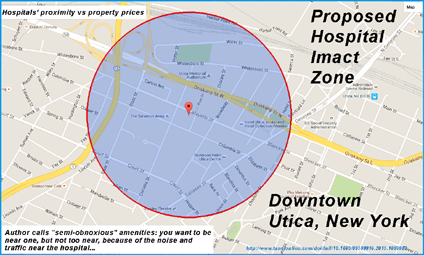 September 18, 2015 Utica, NY- Look for our ad in Mohawk Valley and Utica publications...

October 23, 2015 Utica, NY- This week an area politician mailed #NoHospitalDowntown a note and an article, suggesting some reading. Excellent! We love researching healthcare and hospitals- in fact that's exactly why this website exists!

Link To This "Survey" & Our Rebutal

We’re looking at the current "concept" for a new Utica hospital, and how promoters can believe it's a good idea. #NoHospitalDowntown opposes placing a hospital downtown and we’re reading and advocating for a knowledgeable and well-informed process that brings this to fruition.