As defined in the SEQR Handbook93 , a catastrophic impact is

The handbook, developed by the NYSDEC, further states that an impact is “reasonably foreseeable” if it could occur as a result of the action, even if the probability of such an occurrence is small.

It is important to note that potential extreme hazards are not inherent to the nature of the proposed action. While hospital-related activities can result in hazards (i.e., lifting and moving patients; needle sticks; slips, trips, and falls; and the potential for agitated or combative patients or visitors), they do not, regardless of their location, typically include activities, which would reasonably result in catastrophic impacts.

Consistent with the Final Scoping Document (Appendix C), the issue addressed in this section focuses on potential secondary impacts associated with the proximity of the project to the existing, active CSX railroad located approximately 1,400± lf northeast and downgradient (20± feet) of the project area, including its use to provide for periodic pass-through transport of Bakken oil95 and other hazardous substances. During the scoping process, commenters, expressed concerns relative to the proximity of the hospital to the railroad, and potential impacts associated with a derailment and release of chemicals, oils or other hazardous substances.

Site access is an important consideration for critical facilities such as hospitals. The ability for emergency medical service (EMS) personnel, patients, medical personnel, staff and visitors to quickly access the site often places hospitals proximal to the cross-roads of municipal highway systems (i.e., Utica’s North-South and East- West Arterials). Highways are also used daily to advance commerce, which often depends on multiple transportation modes including highway and rail (i.e., multi-modal corridors of commerce) to bring goods and services to customers. Consequently, the proximity of rail and highway systems and their use in transporting goods (including hazardous substances) is a common occurrence through the United States.

While the location of hospitals adjacent to highways and railroads, which are utilized for interstate commerce, are common96, it does not preclude the need for planners and decision-makers to be diligent in implementing measures to prevent adverse impacts, even if the probability of such an occurrence is small.

Consistent with SEQR implementing regulations regarding the content of an EIS (6 NYCRR § 617.9), this section will provide for an evaluation of the potential secondary impact, limited to:

The assessment was based on coordination with the following agencies:


In addition, the following plans were reviewed:

Likelihood the Impact Would Occur

The resultant evaluation is provided below.

Freight train accident statistics are compiled by the USDOT’s Federal Railroad Administration (FRA). The primary role of the FRA is to strategically monitor, inspect, and assess track conditions to determine whether a railroad is complying with federal safety standards (40 CFR Part 213). Investments in infrastructure and equipment, new technologies, safety training, and stringent FRA oversight have significantly improved the safety record of America’s freight railroads. Figure 19 illustrates historical trends in national train accidents per 1 million train-miles from 1980 to 2017103. In general, train accidents have decreased from over 11 accidents per 1 million train-miles in 1980, to approximately 2.3 train accidents per 1 million train-miles in 2017; a 79% decrease. Extrapolating this latest national safety data, the likelihood of a train accident occurring along the one- mile stretch of railroad northeast of the project area (or along any one-mile stretch of railroad between North Dakota and the Port of Albany) would be negligible.104 The probability of a train accident involving Bakken oil is less. The probability of a train accident involving Bakken oil and a fire is even less, and so on.105 The likelihood that such an event would impact the hospital is further influenced by additional variables including: 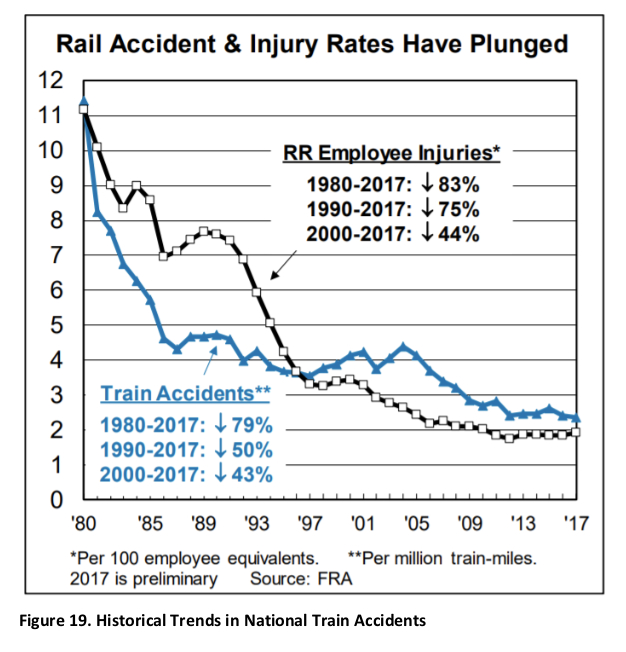 Consequences of the Potential Impact

While the likelihood of an impact is negligible, due diligence and preparedness are prudent and necessary. Consistent with the USDOT’s ERG and New York States’ EO125, the IHC will be identified as a special receptor within the site-specific Geographic Response Plan (GRP). GRPs are planning documents and spill response tools, prepared by the NYSDEC, in consultation with the New York State Division of Homeland Security and Emergency Services, NYSDOH, and local, regional and federal stakeholders, that are used to guide initial emergency response efforts associated with a major oil spill. The GRP for railroad mile-mark “QC 238” represents the area surrounding the existing railroad inclusive of the project area. To facilitate planning and training, the proximity of IHC operations will be accounted for in future training, preparedness and asset management activities guided by the County’s CEMP. MVHS will coordinate with Oneida County to update and implement appropriate sections of the MVHS’ EOP and the County’s CEMP, respectively.

While no alternatives were identified, the following mitigation measures have been or will be implemented:

93 The SEQR Handbook provides agencies, project sponsors, and the public with a practical reference guide to the procedures prescribed by the SEQRA – Article 8 of the Environmental Conservation Law (http://www.dec.ny.gov/docs/permits_ej_operations_pdf/seqrhandbook.pdf).

94 Bakken oil is a type of ‘light sweet crude,” a relatively high quality oil, which is produced and transported, predominantly by rail, from North Dakota. Trains transporting Bakken oil pass through Utica on their way to the Port of Albany. The Material Safety Data Sheet (MSDS) for Bakken oil is available at https://www.msdsdigital.com/bakken-crude-oil-sweet-msds.

97 The Oneida County Department of Emergency Services is responsible for implementing the County’s Comprehensive Emergency Management Plan (CEMP), which is recognized by local governments as a fundamental strategy for community disaster preparedness and response, and is endorsed by the State of New York and the federal government as an essential policy for effective public safety. The Department coordinates with local, regional, state and federal emergency management stakeholders to provide for the region’s emergency preparedness and response. Department staff anecdotally indicated that their largest emergency response concern (e.g., most likely to occur) in the region is an ice storm.

100 Published by the United States Department of Transportation (USDOT), the guidebook (USDOT 2016) is intended for use by first responders during the initial phase of a transportation incident involving dangerous goods/hazardous materials.

101 In 2014, at the direction of Governor Cuomo, New York State agencies conducted a coordinated review of safety procedures and emergency response preparedness related to increased shipments of Bakken oil across nearly 1,000 miles of the State. A report containing 27 recommendations for state government, federal government and industry to take to reduce risks and increase public safety in the transport of crude oil was subsequently released (http://www.dhses.ny.gov/crude-oil/preparation.cfm). State implemented actions include: preparing and training first responders, establishment of a New York State Foam Task Force, provision of spill response equipment, updating and enhancing response plans, and creation of an interagency (local, state and federal) work group to further integrate emergency response plans across all levels of government.

105 The NFPA compiled statistics of rail vehicle fires in the United States from 2003-2007. On average, tank cars only accounted for 2% of total fires involving rail vehicles (NFPA 2010, https://www.nfpa.org/-/media/Files/News-and-Research/Fire-statistics-and-reports/Fact-sheets/railvehiclefires.ashx).

107 The New York State Division of Homeland Security and Emergency Services operates the State Preparedness Training Center (SPTC) at the former Oneida County Airport. The mission of the SPTC is to “Provide first responders and governmental officials with the very best knowledge, skills and abilities necessary to safely and effectively prevent, prepare for, respond to and recover from terrorist acts and other man-made and natural disasters.”

110 According to the Oneida County Department of Emergency Services, the first responders also have access to 3 hazmat trailers (2 County, 1 State).

Return to Section 3.0 Index page, go to next section 4.0 Effects on the Use and Conservation of Energy, or you may return to MVHS SEQR DEIS Index.