Much is spent on safety, but accidents by their nature cannot be avoided. We recently contacted the Utica Observer-Dispatch to remind them of a recent Huge Rail Explosion, just down the tracks in Oneida, which they reported on.

Downtown Utica is no stranger to derailments either... 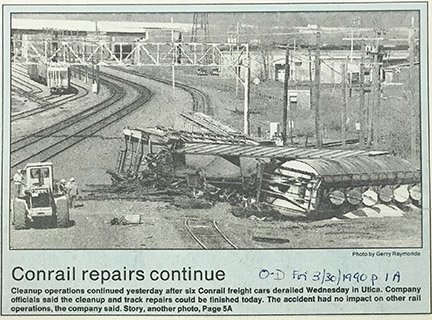 1992, 25 years ago, Derailment: "Five youngsters – ranging in age from 9 to 14 – are charged with causing the derailment of an eastbound Conrail freight train last week. Utica Deputy Police Chief Nicholas Yagey says the five boys piled tires, chairs and a street sign with a cement base on the tracks near the Goldbas Playground. The debris got caught under the front wheels of the front car, . It came to a stop nears the Bagg’s Square Bridge. There were no injuries. The youngsters – who remain with their families – have been charged with second-degree criminal mischief and first degree reckless endangerment. Conrail says the damage will exceed $400,000."

As another precuation, in the same year, another case of vandalization led to a Train Derailment With 74 Injuries.

Our Leaders have Warn us of... Should train cars and tankers carrying oil, propane, or toxic chemicals derail in downtown, it's very probable that a 1/2-mile or 1-mile evacuation radius would have to be established. Long tanker trains pass Union Station routinely...

And another 1990 video show a Busy Train Morning in Utica, NY

A rail diaster incinerates the downtown of Lac-Megantic, on July 6, 2013.

Building a train derailment timeline, of an Upstate New York rail corridor running through downtown @CityofUtica Just adding this one from 1990, more at https://t.co/VlDbLrtuc2 pic.twitter.com/Pn9Bk1l1RZ

As stated elsewhere, tracking derailment news is a full time position, worthy of a research staff! Obviously the new @MVHealthSystem hospital crew didn’t have one, but we persist... pic.twitter.com/y4lov2siZi